Kevin De Bruyne’s goal secured City a 1-0 victory over Chelsea at the Etihad, putting them 13 points clear at the top of the Premier League standings. The hosts were in control throughout the game but couldn’t break through until De Bruyne’s spectacular second-half goal handed them the lead.

It extended City’s league winning streak to 12 games, and despite the fact that Liverpool, who are 14 points behind City, have two games in hand, Pep Guardiola’s team continues to seem unstoppable in their title defense. Raheem Sterling, Phil Foden, and Jack Grealish formed a fluid front three for City, which caused Chelsea problems with their rapid movement.

Just seven minutes into the game, Marcos Alonso got a yellow card for hauling down Sterling as the winger raced past him.

In the first half, Chelsea had few chances to get excited about, although Romelu Lukaku did find some space after shrugging off John Stones. Instead of firing, the Belgian drove into City territory and passed the ball to an offside Hakim Ziyech. The lone significant chance of the half came when Mateo Kovacic, who had been caught on the ball, gave Grealish with a fantastic opportunity.

The City player just had to beat Kepa Arrizabalaga, but the Spaniard produced a fantastic save to keep the game scoreless. Chelsea didn’t have a single shot in the first half, but they had three in the first few minutes of the second half. 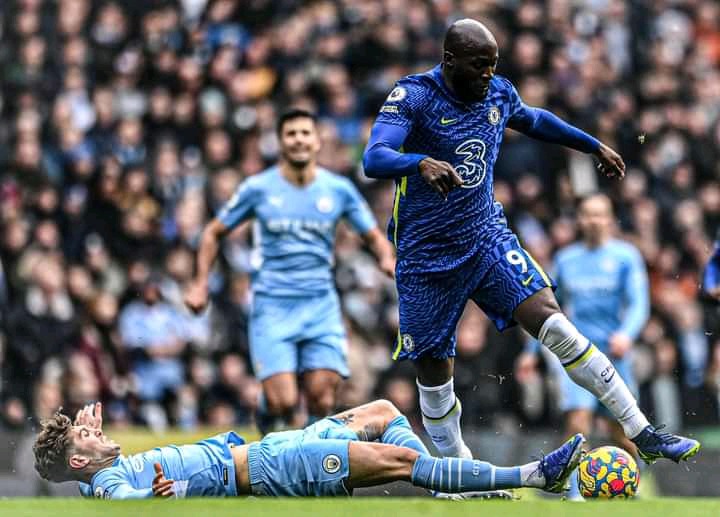 Lukaku was passed clear through on goal and had a great chance to score, but Ederson saved it. The rebound fell to Hakim Ziyech, who blasted over, and Alonso had a wayward shot from distance a minute later. City remained patient and probed in possession, and Sterling came close for the hosts, but his attempt sailed wide of the far post.

With 20 minutes left on the clock, Kevin De Bruyne scooped up the ball and slipped by N’Golo Kante, who had just attempted to hack the Belgian down. De Bruyne 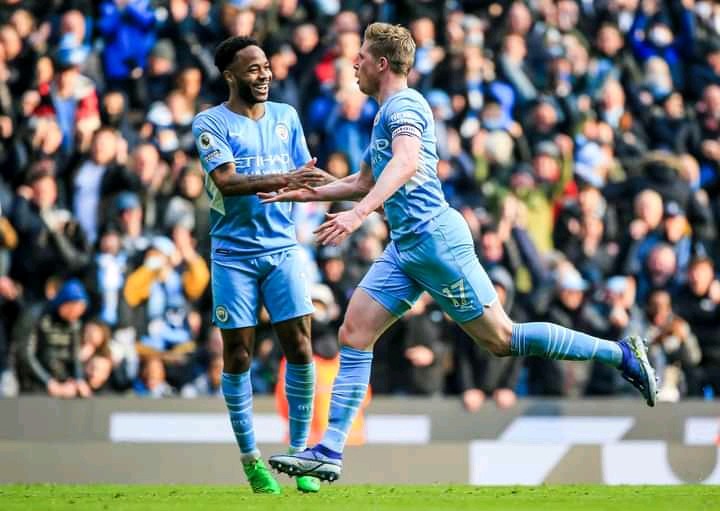 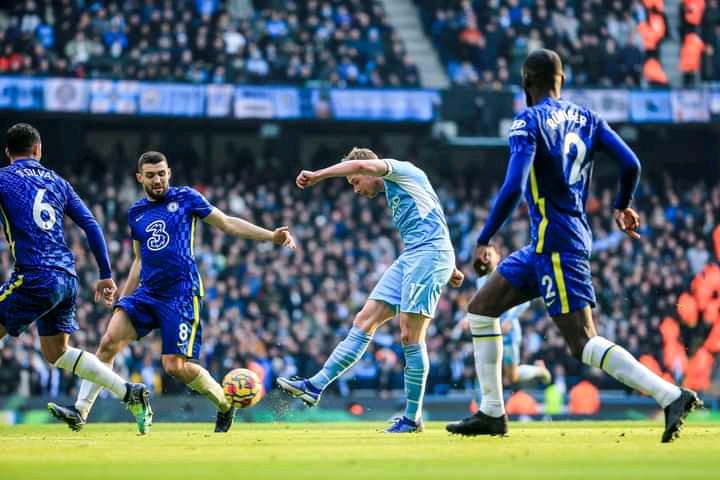 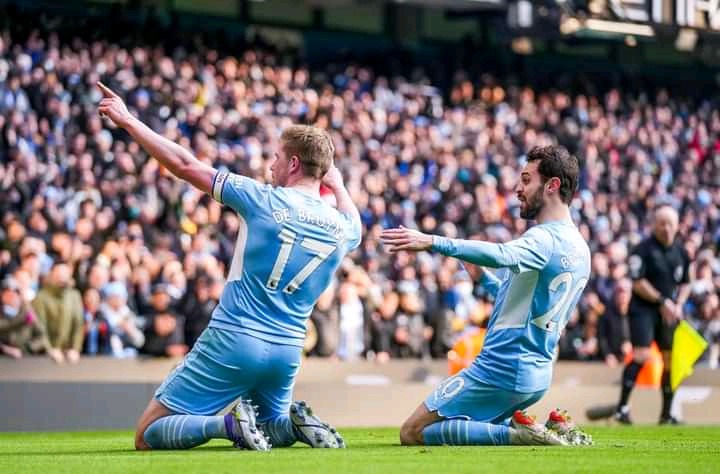 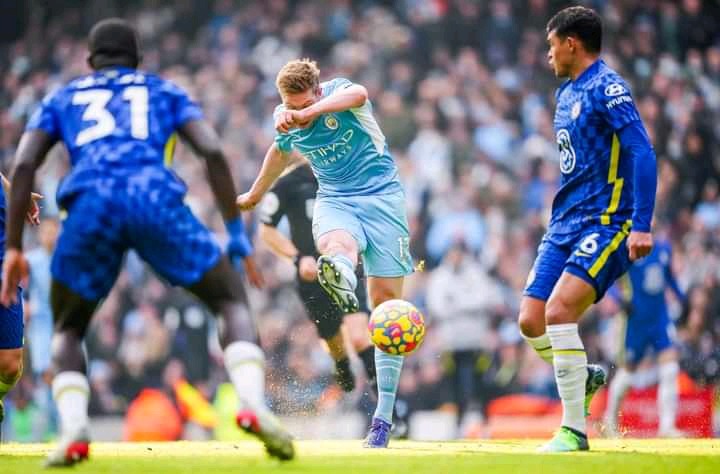 then put City ahead with a stunning curling attempt from outside the area that went around Thiago Silva and past Arrizabalaga.

Chelsea showed no signs of regaining control late on, with Foden blasting over when he had a chance to double the advantage, as City strolled to yet another victory, and it’s impossible to see how they won’t lift the Premier League trophy in May, even with 16 games remaining.

One man was outstanding in today’s win for Manchester City. 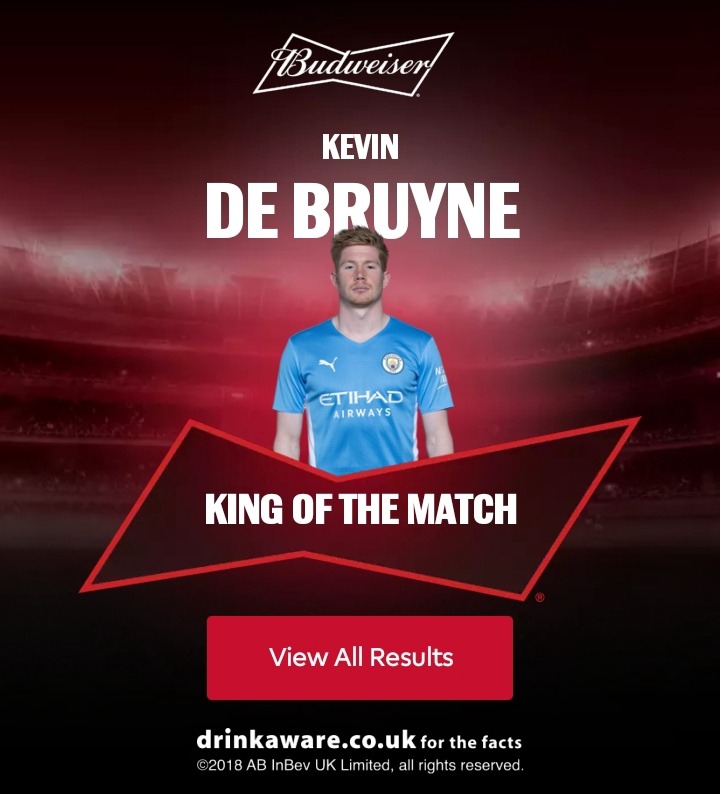 Former Chelsea Midfielder, Kevin De Bruyne was voted the man of the match after his fantastic display against his former employer, scoring a crucial winner and also causing a lot of problems for the likes of Rudiger, Kante in Midfield and defence.

Drop Your thoughts below

Related Topics:OFFICIAL: Former Chelsea Midfielder Wins Man of the Match Award After His Brilliant Performance
Up Next

(Video): Kevin de Bruyne beats Kepa from outside the box to give Man City 1-0 lead

‘Get him off the pitch FFS!’: Chelsea fans fume at Romelu Lukaku after their £98m Belgian striker wasted a glorious chance to give them the lead at Manchester City