It is not hidden from anyone that the Gunners are after a striker in this January transfer window. Arsenal have been after Fiorentina’s Dusan Vlahovic since last summer and according to recent reports, the North London club might have made a breakthrough in the pursuit.

Alexandre Lacazette is playing well, but Pierre-Emerick Aubameyang and Mikel Arteta are having some issues. Among the backup strikers, Folarin Balogun is off to Middlesbrough on loan, while Eddie Nketiah is reluctant to sign an extension with the club, even after Arteta tried to convince him otherwise.

Arsenal want to plan for the future without their stalwarts Aubameyang and Lacazette, whose contract is set to expire at the end of this season. Their search for a young and long-term forward seems to have ended with the Serbian striker.

Arsenal have had Dusan Vlahovic on their wishlist since last summer, but Fiorentina was hopeful that he will extend his stay in Florence. The Gunners have also been linked with Everton’s Dominic Calvert-Lewin and Real Sociedad’s Alexander Isak to bolster their forward line. However, the Serbian forward was clearly the first choice for the North London club among the other names. 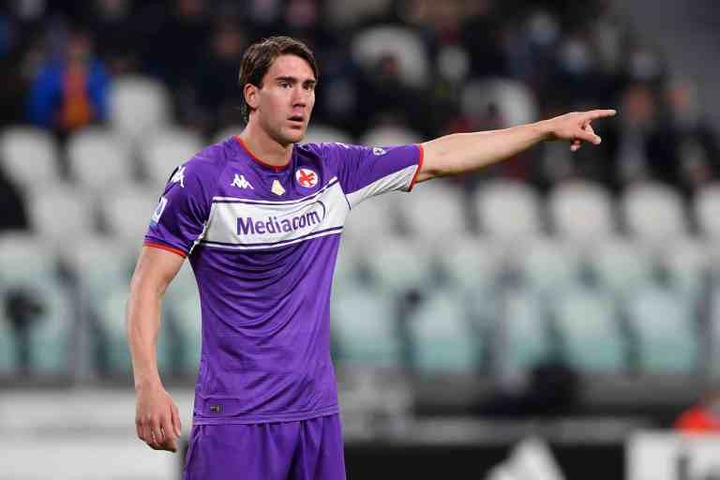 Earlier, it was reported by La Repubblica (via Metro) that Arsenal tabled a bid of €70million (£58.5m) for Dusan Vlahovic. The report stated that the Serie A club might begrudgingly accept to sell the 21-year-old after the huge offer submitted by the Gunners.

Fiorentina president Rocco Commisso was hopeful that the player would extend his contract with the club who is already in the final 18 months of his contract. However, with the Serbian turning down and delaying his renewal, Commisso changed his stance and was ‘ready to let the player go’ as the striker’s ‘future moving further and further away from Florence’.

However, the Italian club are reportedly demanding €75million for the striker and want most of it upfront. Now, according to Corriere Della Sera (via Daily Mail), Arsenal have submitted a fresh bid of £50m for Dusan Vlahovic with Lucas Torreira included as part of the potential deal.

Torreira is currently on a season-long loan at Fiorentina and has become a regular feature of the starting XI since joining them in August. The report claims this offer will fascinate the Tuscan club the most and might tip the scales in Arsenal’s favour. 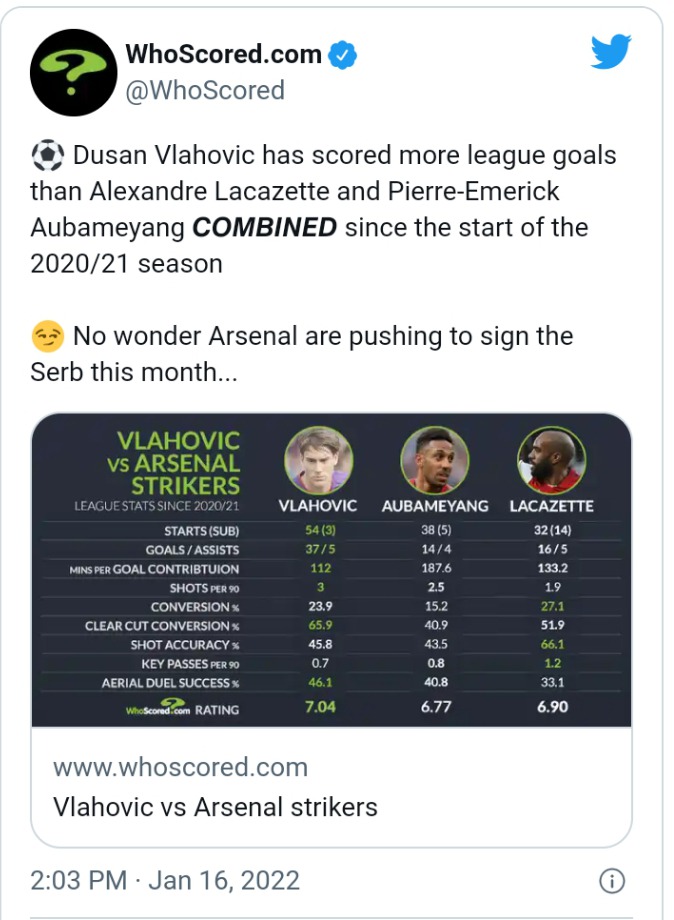 The hype around Dusan Vlahovic is not for no reason. The striker has found the net 43 times in 97 Serie A games for Fiorentina. He scored 21 league goals last season and already has 16 goals this season so far. The Serbian also scored in the recent cup game against Napoli, helping his club win 5-2.

With such stats and just one-and-a-half seasons left on his contract, many big European clubs are after his signature, including Arsenal. Even though the London club had Calvert-Lewin and Isak on their list, the availability of Vlahovic has certainly excited the board and the fans alike. 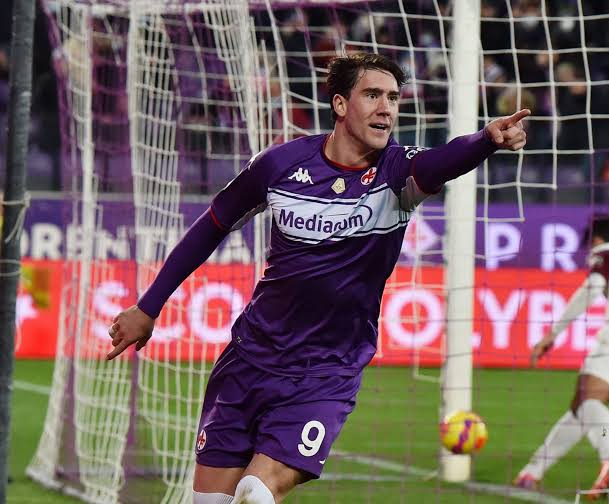 Ian Wright, speaking on Optus Sport, was hopeful that Arsenal will bring Dusan Vlahovic to the Emirates. He suggested that things could ‘start to happen’ if the club can bolster their squad in the winter transfer window. He said on The Kelly and Wrighty Show:

“Arsenal have done fantastic business up until this point.”

“I believe they do need to get another striker, even if everything can be sorted with Aubameyang.”

“I’m hearing Vlahovic from Fiorentina. We need that player who can be between Lacazette and Aubameyang.”

“But if we can get that striker, that hard-running striker who is good at the link-up play and is a good finisher – which Vlahovic is – then you’re starting to think it’s starting to happen now for Arsenal.” 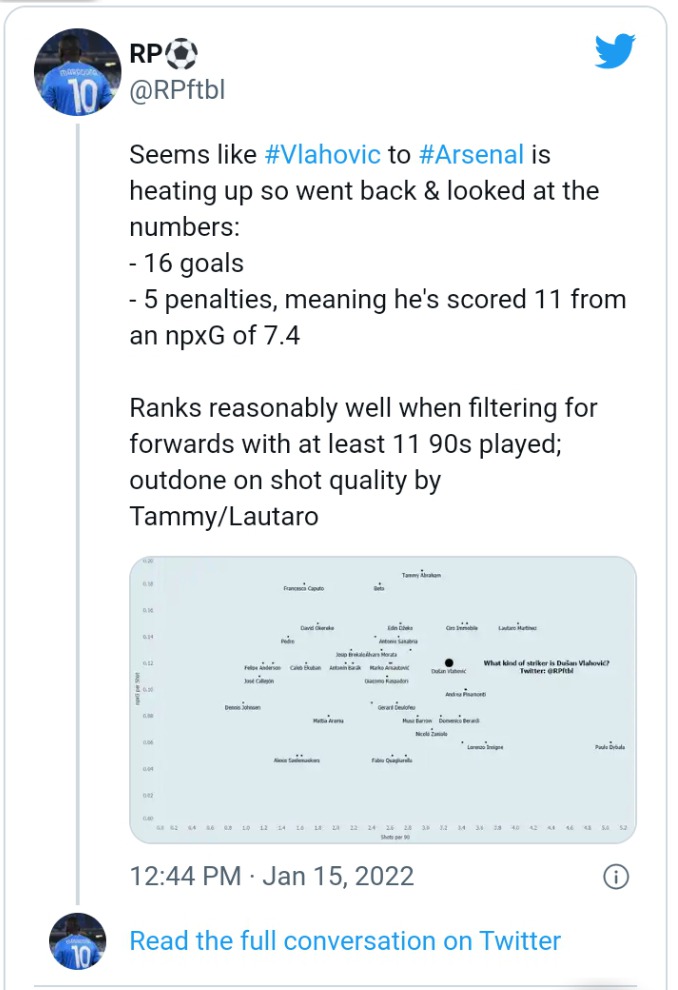 Meanwhile, former Arsenal full-back Nigel Winterburn sees Dusan Vlahovic as an ‘interesting signing’ as the Serbian forward ‘can offer something different’ to the currently available options. He told Paddy Power:

“We’re being linked with a lot of young strikers but I do like Vlahovic from Fiorentina because he looks like he can offer something different.”

“He scores all sorts of goals. He takes penalties, he scores from close range, and from the edge of the box. He’s left-footed and looks powerful and strong.”

“There seems to be a big push from Arsenal and he’s the one name that keeps coming up.”

“It will be interesting to see how that develops but like everything, if he does come to Arsenal, I’m only interested in what he does when he’s at our football club. He would be an interesting signing.”

Related Topics:Massive Boost For Arsenal As They Make Breakthrough In The Pursuit Of The €70m Rated Serie A Striker
Up Next